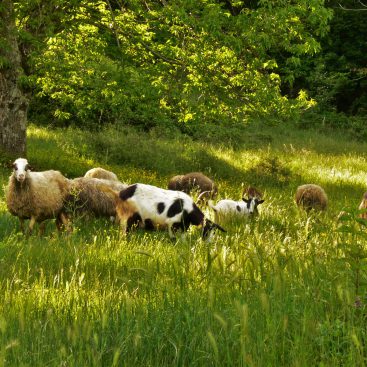 DESCRIPTION OF THE METALLIFEROUS HILLS

Located between the Tuscan coast and the area of the northern Maremma, this is the most noted mountainous
area in southern Tuscany after Amiata.
Its peaks reach to 1000m and higher: Le Cornate, Poggio di Montieri and Poggio di Prata are amongst the best known.
This is the region where some of the most prominent rivers begin –  the Cecina,  the Merse,  Pavone,  Farma the riverbeds of which are particularly rich in natural vegetation.
The medieval towns of Massa Marittima, Montieri, Gerfalco, Travale, Prata, Roccatederighi,
Sassofortino are gems set in the rocks.

This is a panoramic trail looking down over the village of Prata beneath  before heading into the forest.  These peaks are in the western part of  the Metallifere hills and in good weather conditions, we can look over the hills to see  the coastline of the Tirrenian, Mount Amiata, Lake Accesa and the plains of the Maremma.

‘Le Cornate’ is the second highest summit of the Metallifere hills – a long crest of calcareous rock.  From the top of the summit on a clear day, you can see as far as Corsica.   At the foot of the mountain, are many sites of geological interest amongst which is an ancient quarry of red ammonite limestone, unique in its kind.  A few kilometres away, is the ‘Castello di Fosini’, well defended by the rocky pinnacles above which it stands.
WhatsApp